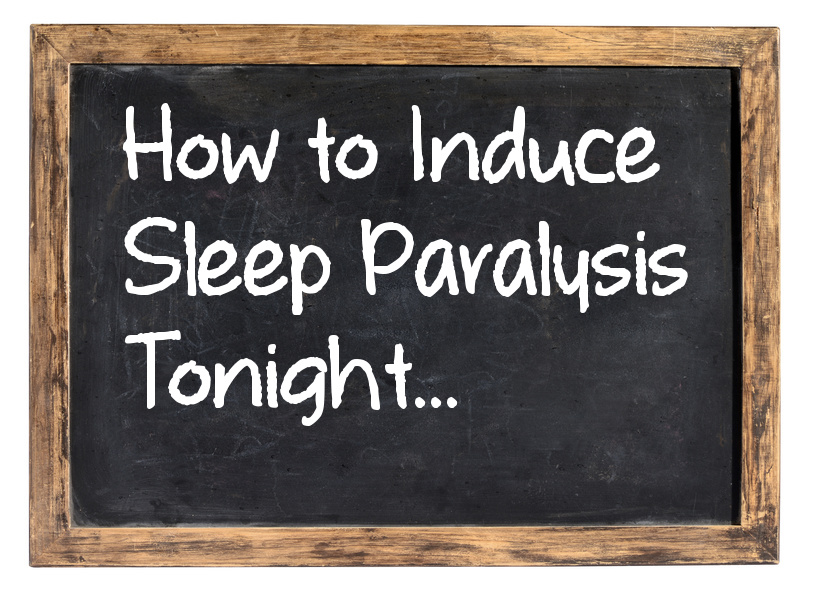 It is often easier to induce astral projection having first induced sleep paralysis.

By the time you have finished reading this to the end, you will know everything you need to know to do this yourself.

Sleep paralysis is quite easy to induce, because you already experience it around four times each night, although you probably are not aware of it.

I would expect you to have some level of success on your first attempt unless you are very tired.
Extreme tiredness will make it entirely futile to try, because you will keep falling asleep. In this case, I would recommend that you put your efforts into restoring your natural energy levels, aiming to get a minimum of six to eight hours of sleep per night for at least a week.

So, what is Sleep Paralysis?

When we talk about sleep paralysis, we are generally talking about when a person’s mind wakes up, while their body is still asleep, before rapid eye movement (REM) sleep is finished.

This can be involuntary, and involuntary waking sleep paralysis affects around 8 percent of the general population on a regular basis. It affects people of all ages but is most common in teenagers and young adults.

Additionally, around 25 percent of people have sleep paralysis once or twice in their life.

This is not considered to be a dangerous or harmful medical condition and should pass in a few seconds or minutes, but can be very frightening.

During rapid eye movement (REM) sleep, the brain has vivid dreams, while the chemicals (inhibitory neurotransmitters) glycine and gaba are released to “turn-off” the muscles of the body. This is a normal part of the sleeping process, and is nature’s way to prevent you from acting out your dreams.

So, in one sense, sleep paralysis is so ordinary that everyone experiences it during their normal night’s sleep, every time they reach the REM stage. And since you typically enter REM sleep four times per night, this how often you ordinarily experience sleep paralysis.

This is a feeling of being conscious but unable to move. When involuntary, it occurs when a person passes between stages of wakefulness and sleep. During these transitions, you can find yourself unable to move or speak for a few seconds up to a few minutes. You may also feel pressure or a sense of choking.

Sometimes, there is a “sense of dread”. Hence…

Because you are in a dream-state during SP, it shouldn’t come as a surprise that your imagination can run riot during this time.

The night hag or old hag is one such creature people have “seen”. Here, you might feel a presence of a supernatural being restraining you as if it were sitting on your chest or the foot of your bed.

Obviously, if you aren’t expecting this, it can be a bit of a worry!

If you see or sense something like this, be reassured that you are having “hypnagogic hallucinations” – you are not being attacked.

Closing your eyes will help if you are getting disturbing visions. You will still likely find yourself hallucinating with your other senses. Auditory hallucinations may be experienced, with voices commonly heard, along with other sounds less easy to describe.

Henry Fuseli’s gothic-horror masterpiece The Nightmare (1781) is a wonderful evocation of sleep paralysis as a demonic visitation. 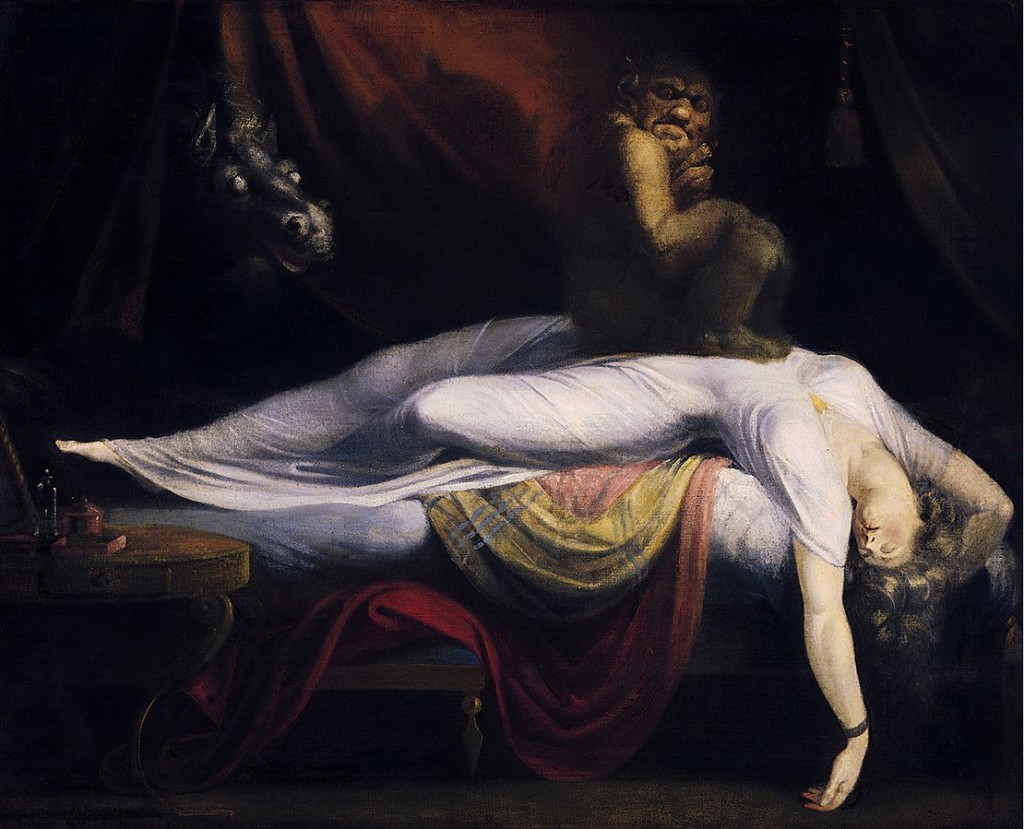 The Nightmare by Henry Fuseli

It depicts two demons, one, an incubus sitting on a sleeping woman’s chest, and another, horse-like presence, at the foot of her bed.

Nonetheless, there is nothing demonic about the experience, and be assured you are not opening yourself up to any attacks from the spirit world. Any visions like these described are just your mind’s way of trying to make sense of the experience.

SP and the Stages of Falling Asleep

So, unless you are extremely tired, you don’t fall asleep immediately.

In fact, your body falls asleep in a series of stages, as you receive “cues” from your mind.

You are unlikely to be aware of these, during a normal night’s sleep.

Sleep paralysis is your body’s normal way of immobilizing your muscles, so you don’t hurt yourself during your sleep.

However, it’s possible to be aware of sleep paralysis, when your mind is awake.

Think of this as the opposite side of the coin from sleepwalking – where your mind is asleep, but your body is not immobilized!

Ordinarily, your body can’t fall asleep, unless your mind is asleep first.

If you want to induce sleep paralysis, lie as you normally would while waiting to fall asleep, but ignore the urges to move, scratch your nose, or roll over and change position. These urges are a normal part of the falling-asleep process, and are cues that your mind is now asleep.

So when you ignore these urges, it tricks your body into believing your mind is asleep.

Once sleep paralysis kicks in, you will start to notice some unusual sensations.

If you are covered with a blanket or duvet, you may experience them as very heavy, weighing you down.

It may be uncomfortable, or unnerving.

Ignore the feeling, and don’t panic, nor allow yourself to move.

Conversely, you may start to experience a feeling of weightlessness.
“Vibrations”, as I explained in Out-of-Body Experience Symptoms, are likely, the deeper into sleep paralysis you fall. These can vary from a light buzzing, to a violent shaking, and every stage in between.

These may feel so intense that you might assume an observer would be able to tell – but actually you could have someone else in the same room as you, and they would never know!

This, clearly, can also be quite frightening, if you don’t know what to expect. Don’t let it distract you, or panic you from your state-of-mind.

How to ensure your SP success…

In spite of a number of “experts” suggesting that you simply lie down and wait for sleep paralysis to happen, unfortunately, it often doesn’t work that way.

And guess what? You feel discouraged, and you give up, right?

The key is to wake yourself up while you are already in the REM state, and then start the process of fooling your body into sleeping, while your mind is already as close to being in the REM state as possible.

What you need to know:

Your first sleep cycle is around 90 minutes long, and your first REM sleep should occur at around 70 to 90 minutes, and last around 10 minutes.

The following sleep cycles are typically longer, at between 100 to 120 minutes long, with a progressively longer period of REM sleep. From the graph below, you’ll see that if you sleep for eight hours, your final REM sleep could last as long as an hour.

So, I’d suggest that your third or fourth sleep cycle is the optimal time at which to set your alarm.

Start with setting your alarm for either 270 or 360 minutes into your sleep. The reason I’ve chosen these times is that on average your REM sleep should start at around 260 minutes for your third sleep cycle, and 350 minutes for your fourth. So I’ve added an extra ten minutes so that REM will already be in progress.

360 minutes also gives you six hours of uninterrupted sleep, which for most people is the minimum they should sleep for optimum health and well-being.

Excellent. Now onto the next step.

The most effective position to encourage Sleep Paralysis

According to studies, sufferers of sleep paralysis are far more likely to be sleeping on their back, also known as the supine position.

In fact, around 58% of people who experience SP say they tend to sleep on their back.

So, if you wish to encourage this phenomenon, then it stands to reason that sleeping on your back will increase your chances of success.

Using hypnotic suggestion to trick your body into falling asleep

You might not be aware of this, because when it happens you are usually falling asleep…

…But when you are drifting off to sleep, there are some subtle physiological sensations.

The most pronounced ones are:

Keep telling yourself that you are starting to feel cooler, starting with your extremities, and working your way towards the center of your body.

Meanwhile, allow yourself to observe how your arms and legs are feeling heavier and heavier.

Next, you’ll maintain your focus on remaining awake, while making sure that you don’t allow yourself to move, or respond to any of your body’s “tests” to see if you are still awake.

Keep calm during the “vibrational” stage, and allow SP to happen. Because at this point, you are so close to the REM state, it should be quite easy.

The more you practice inducing sleep paralysis, the easier it becomes, though if you use this method, you ought to have some success on your first attempt.

It’s just one stage of the process of having an out-of-body experience, but in my view the most ignored.

Focus on a dream you would like to have, and experience a lucid dream, or use one of the out-of-body experience techniques to “launch” yourself from your body, using one of the OBE techniques I have described!